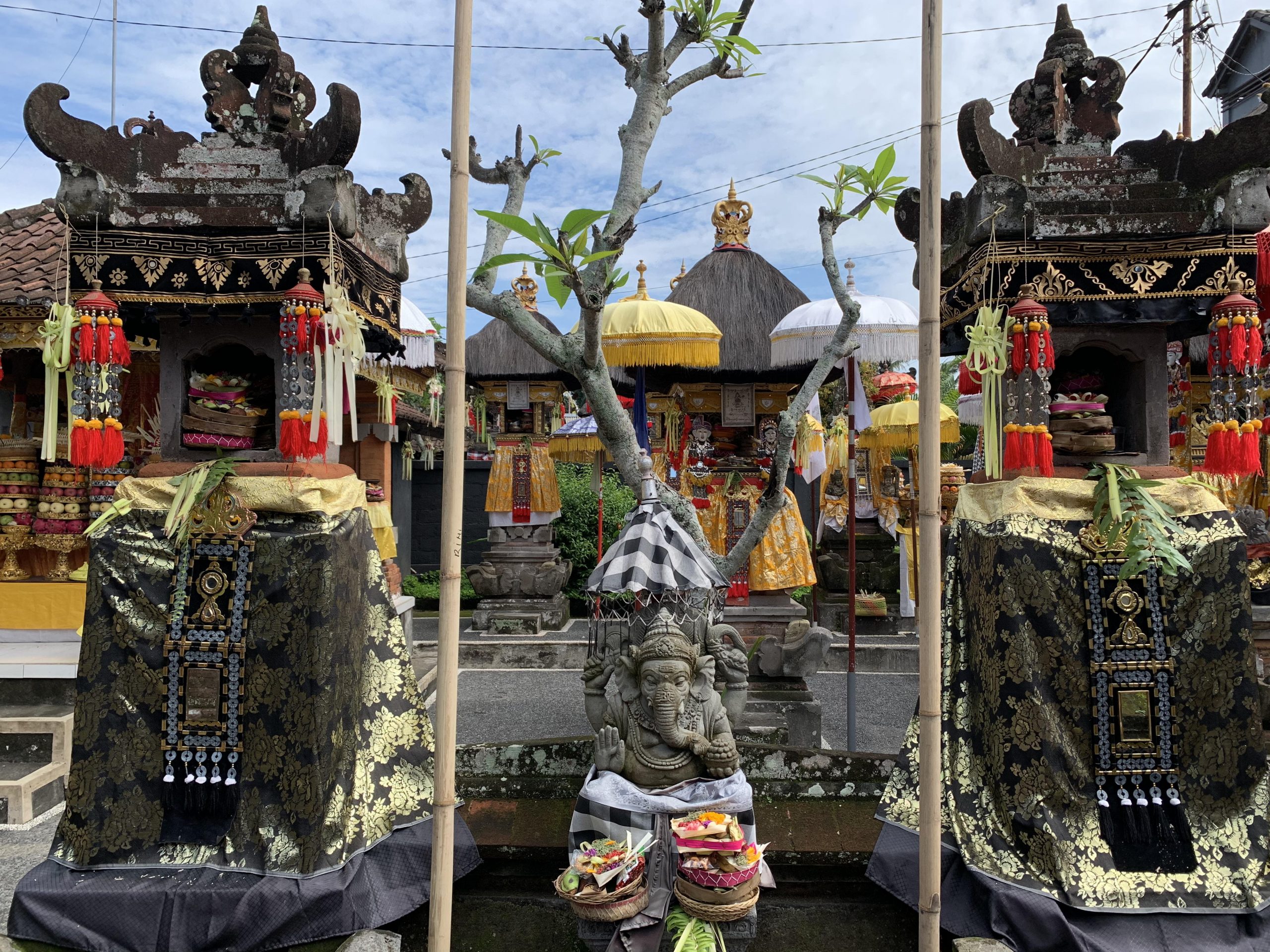 The religious beliefs are embedded in every element of Balinese life from their housing to clothing. Three main pillars of their daily life revolve around family, community, and participation of religious rituals. You can witness colourful parades on the street almost on a weekly basis as the Balinese hold ceremonies for countless occasions.

One of the most important Balinese Hindu ceremonies is Galungan where people celebrate the victory of good over evil and welcome the visit of their ancestral spirits at home. The feast is held twice a year (once every Balinese calendar year – 210 days) and lasts for about two weeks. It is a religious holiday that ends with Kuningan when families spend time and eat together in their hometown.

The first Galungan celebration of this year fell coincidentally on when I was there on February 19, 2020. It is hard to miss as house temples are brightly decorated and bamboo poles are erected creating such a beautiful sight along the village road. This bamboo pole or penjor is of much significance. While the women spend days preparing the offerings and foods, the men are responsible for making the penjor. It is pure art form. They use various fresh natural materials such as flowers and pandan leafs as decorations and put rice and some other foods in the offering casket suspended at the end of the pole. I find that there is a bit of a lowkey competition among houses. There is no limit to how extravagent the penjor can be, the bigger the better. And not to be biased but I think the streets of Ubud have so many amazing ones compare to other neighbourhoods.

On the day of Galungan, Nyoman, the owner of Sariya Homestay, invited me along with his family to attend the ceremony at the village temple, Pura Dalem Pacekan Penestanan. Everybody is dressed up in traditional costume and although it has been raining in the evening for several days but the skies clear their way for Galungan ceremony. Around 5-6pm before sundown, the villagers gather and the drums are rolling in a dramatic rhythm to mark the start of the ceremony.

The Galungan parade is led by a barong or the protective beast followed by reincarnated forms of Shiva and his wife. The barong makes his way through the village with the purpose to restore balance between good and evil in a house. Each house decorates their temple, dress up, and prepare the offerings to welcome the holy blessing while the shaman performs the ritual by praying to the gods and the rousing drumbeats continue throughout the ceremony. Everyone in the village joins the parade and walks alongside each other for more than three hours. When night falls, every house is officially blessed.

Some villages, like Penestanan, take pride in decorating their barong. The head piece of the barong is believed to be made of pure gold. It is locked inside the vault at the main temple with the key that only leaders possess and an alarm installed, loud enough for the whole village to hear if any unwanted break-in dares to happen.

Towards the end of the ceremony, the shaman chants prayers, the barong is put back into the vault. Everyone sits in stillness making a wish by holding a flower above their head. Shaman’s helpers splash the holy water onto the crowd then we stick a few grains of rice on our forehead as a sign of purity and blessings by gods.

I can’t help but feel blessed to be able to participate in such a special ceremony. The villagers have been very welcoming of any spectator. They allow me in even though I don’t belong to their village and am a Buddhist. What I understand of it is only the surface. But all I can say is that it is hard to feel unhappy after witnessing this spiritual Galungan ceremony.

A few weeks after Galungan and Kuningan is Nyepi or Day of Silence when everything comes to a complete stop. No flights at the airports for one day, no one on the street, no phone service, no electricity, the sky turns so dark you could see all the stars. This is so that the Hindu can meditate at their home while the evil spirits roam the street. I got to see the making of Ogoh Ogoh or the monsters made from bamboo and paper mache, another art form wonderfully created by the talented Balinese. Again, they will parade these monsters and burn them at the waterfront signifying purification and renewal.

There is no lack of cultural activities on this Island of Gods to observe. It is a blessing for the eye, mind, and soul that anyone can appreciate.