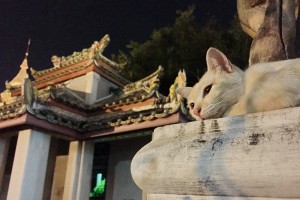 The other night I had a chance to explore Wat Pho, a Buddhist temple nearby the Grand Palace in Bangkok, with the Curious Cat Boy aka. PierreAteIt after our magical dinner. Wat Pho is known as Temple of the Reclining Buddha with its giant golden Buddha statue and as the birthplace of a traditional Thai massage. You can see small statues showcasing different massage positions around the temple and people say that if you get a massage here it can be quite painful because this is the real traditional one unlike the one you get at Healthland where it is more relaxing. Wat Pho has a nice architecture that is very unique comparing to other Thai temples. It has a touch of a Chinese style because during the time the temple was built (King Rama II-III), Siam welcomed a lot of Chinese merchants. A bit of a brainy stuff but now here comes the highlight!

For some mysterious reason, this trip turned from a chill late night stroll into a cat hunt! At night, the area is exceptionally quiet with very few visitors (tips: if you are a foreigner, normally you have to pay to get in but if you go at night time, it’s free. Whoop whoop!) and we kept spotting one temple cat after another! These cats are pretty friendly and they come in various sizes and colors. The kittens stay in small packs in the corner, on the sala, near the pagoda, in the garden, everywhere!

I’m a Thai and I’ve visited Wat Pho with my friends many many times but this is the first time that I was super excited! The temple itself is undoubtedly gorgeous but a touch of cats always lightens up the Curious Cat Lady 😉